A downloadable game for Windows and Linux

Tizahl's Quest is an action RPG in a 3D lowpoly world! If you have played Diablo or Titan Quest you should feel right at home. Explore dungeons, kill monsters, collect loot and find magic!

Get the game now on Steam:

- dungeons portals: every portal leads to a different dungeon with a boss at the end. Kill the boss to unlock the next dungeon!

Will definitely post updates with fixes/improvements. If more than expected downloads should happen I will add more dungeons and multiplayer!

* World/character assets are from Synty Studios

* Music is by Michael La Manna

* Music for the trailer is made by Nicole Marie T on twitter!!

* UI art is by Claymanstudio

First of all, mad props for participating in the Indie Bundle for Abortion Funds. It is really amazing to see the community band together to deal with these issues.

I'm not really sure if you are fully done with this game and are working on other things, but I have a couple of suggestions and what I hope are constructive criticisms, either for improving this project or for your next one(which I do hope you make because, despite the issues, I did enjoy this).

Firstly, I do really like this style. I think this kind of art is great, especially for this type of game.

Now on to some of the less good, glitches. I got kinda soft-locked basically immediately. I entered the first dungeon and killed the boss before talking to any NPCs or getting the quest to kill the boss. So, when I did get the quest, I couldn't complete it and it locked me out of all of the other quests, so if I suggest something that does exist and was locked behind this(of if I suggest something that exists and I just missed cause I'm dumb), I'm sorry. I also encountered a weird bug where healing potions would(some of the time) only actually heal me after I got hit by an enemy. I would drink a potion, walk around for a while, and only be able to heal when I found an enemy to hit me. Additionally, in the 4th dungeon(which I think was the last) I ran into an area I just couldn't seem to get past as their was a pillar in the way(although I could have just been being dumb or it might have been locked behind a quest).

Now onto the gameplay itself. The game is easy. Like, really, really easy. i got through the first three dungeons and as far as I could into the fourth without dying once. unfortunately, it was not due to any great skill on my part. the combat is very simplistic. i strategy I used was stand still, hit enemies with the heaviest melee weapon  have, and chug a healing potion when necessary. this works 100% of the time. Making the combat more dynamic by adding more movement options like sprinting, a roll, or something would help a lot. so would giving enemies different attacks that can interrupt the player's attacks, and placing a cooldown on healing potions. These changes are mostly designed to prevent the type of cheesy strategy I used for the whole game.

This strategy was enabled by the economy being broken. I was able to basically spam potions the entire time because money was so easy to come buy due to two factors. First, when I reentered a dungeon after clearing it, the chests respawned but the enemies did not. This was made especially game-breaking because chest dropped tons of copies of items. In the first dungeon, one of the boss chests dropped 5 life amulets(I'm not positive what they were called), which in total could be sold for like 800 gold. Then, since the chests refreshed, i could just reenter the dungeon, sprint to the end due to the lack of enemies, and make a cool 800 in like 20 seconds. This got worse later in the game. In the third dungeon, one chest dropped 6 or 7 demon armors, which together could be sold for over 2000 gold. Since health potions are 20 gold, that's a gain of over 100 potions in 15-20 seconds.

Another thing I would change is the map and camera. One thing I found confusing was that the minimap showed the player moving east to west/vise versa, while from the perspective of the player, they were pretty much moving north and south. this made navigation confusing. This may have been slightly offset by the camera rotation, but this feature was clunky. I suggest removing this, and instead having a fix camera that turns as necessary as the player moves. in addition to helping the camera be less clunky and help with map positioning, it could help hide unfinished areas and prevent the camera from clipping into geometry.

Final weird thing I encountered was with the leveling system. By the time I got stuck in dungeon 4, I was level five. I had gotten to assign four points(all were put in strength for more efficient whacking). I think it was supposed to be two points per level, mostly because everything I had an option to level up, I had two points available. If this is the case(which might not be, in which case, ignore me) then I missed out on four upgrade points. Additionally, at one point, the "number of points available" stat in my character screen was very buggy, and at one point said I had negative one attribute points to spend. The xp bar was also weird. Sometimes it seemed to go down(by best guess for this is something giving me a ton of xp and cycling over to the next level but I am not sure and don't really have proof of this).

While very buggy and despite the fact I didn't really finish it, I enjoyed playing it. i find it especially impressive that you made this with such a small team, I certainly couldn't do it. I hope you go on to make more things and improve, and I really hope some of this was helpful!

Thank you very much for your review and suggestions! Wow you really wrote a long one:) I always take everything into consideration and see what I can do and what's possible.

Making something in 3D was definitely challenging.

That's why now I'm back into my comfort zone and making something in 2D again ha ha. I think I wrote a short paragraph on my page:)

Basically it will be a very retro 8bit rpg game.

I'm happy you still somewhat enjoyed the game. Thank you for taking time for your review!

My pleasure! It is far more impressive knowing it was a first(I think) 3d Project! While a bit buggy, it is a fully put together game and is far, far beyond anything I could do :). Great job and I hope your future projects go well!

When clicking directly (left click) on a character to interact/talk player char keeps running circles around the npc, which also happens when clicking on chests but not always.

Health does not update after consuming a potion until getting hit in the next fight.

when entering the 1st dungeon and running back behind (far right of screen) the right fence, cahracter gets stuck due to the Rock wall cluttering the view so it's impossible to navigate since it can't be clicked on the green/pathway, but situation can be remedied by rotating the camera using WASD.

Image above shows bugged overlay when after equipping double sword.

in 2nd Dungeon first loot chest drops a sword that can't be picked up. it's visible but stuck in the ground somehow even though when hovering over it the "Pickup" icon is visible. maybe that's due to being also a double sword that's already equipped. can't really check since it's only halfway visible. (see image)

After killing the Big Troll in 2nd Dungeon, the quest can't be turned in. I assume it's still a WIP Project.

Could be a nice game once finished but needs a lot of polish on the story side. the game seems to not run smooth when walking on the map. i hope my constructive feedback helps.

Thank you for your feedback! I will check out the issues that you mentioned. The equipment and inventory window should be able to open at the same time but I can double check.

I made this project in unity and yes the scroll windows can be kind of funky which is a unity thing and unless I design it different I can't really do anything about it. It should work properly though.

If the game doesn't run smooth it might be a PC issue. I know the game can be slow on older models. However if you have a new super speed computer and it's still slow then I'm not sure:)

I will check everything else you mentioned. Thank you for taking time to write some feedback! 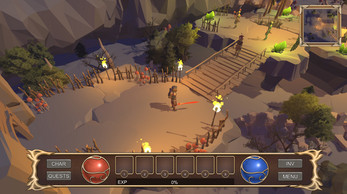 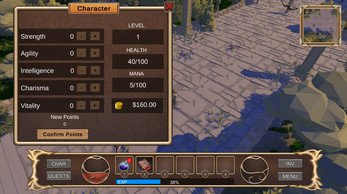 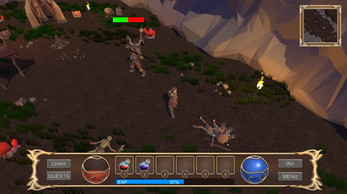 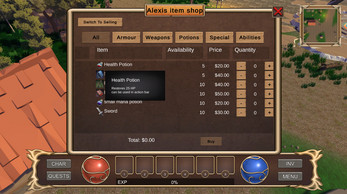